The Anti-Money Laundering Unit (AMLU) was established in 2014 out of the need for greater AML/CFT cooperation and coordination among relevant competent authorities at the operational level. The Unit is the secretariat for the Anti-Money Laundering Steering Group (AMLSG), which is the AML/CFT policy-making body for the Cayman Islands; and also chairs the Inter-Agency Coordination Committee (IACC).

For nearly 30 years the Cayman Islands has taken a lead role in the Caribbean and global fight against anti-money laundering, countering terrorism financing, and countering proliferation (weapons) financing (AML/TF/PF). Here’s our story:

Our commitment was formalised in 1990, when Cayman helped to found the Caribbean Financial Action Task Force (CFATF). It was reaffirmed with the Hon. Attorney General’s chairmanship of the CFATF from November 2010 to November 2011.

In the Caribbean, the CFATF upholds the global standards set by the Financial Action Task Force (FATF) for AML/TF/PF.

Since then, Cayman’s regime has been evaluated four times by the CFATF.

As a leading international financial centre, Cayman has welcomed the results of each evaluation, recognising that evaluations help us to know how effective we are in applying the FATF standards.

After evaluations, most jurisdictions further strengthen their regimes in line with the FATF’s evolving standards (of course, the standard must evolve in order to keep up with global developments). This remains Cayman’s approach, as well.

Following global standards benefits us and other jurisdictions as well. It helps us to deter illegal activity and instead, to attract and retain sound business locally.

Like other jurisdictions, it’s important for Cayman to assess the AML/TF/PF threats that are more likely to occur in our Islands. We have therefore periodically assessed our risk, and have identified these threats as ones for all of us to particularly look out for:

While the FATF standards require jurisdictions to address all of the threats, it also requires a focus on those that are particular to a specific jurisdiction. In response, Cayman has enacted a set of laws and regulations, and issued guidance, to help persons understand and apply our AML/TF/PF framework appropriately, consistently and effectively.

An effective, national AML/CFT/CFP framework that is consistent with international standards.

A unified, multiagency approach to domestic cooperation at the operational level to combat money laundering, terrorism financing, and proliferation financing.

Head of the Anti-Money Laundering Unit

Mr Arana’s role includes chairing the Inter-Agency Coordination Committee (IACC), which coordinates Government’s AML/CFT/CFP policies as they are implemented by the relevant agencies.

Among other responsibilities, Ms. Beaumont provides key technical support to the AMLU on AML/CFT/CPF policy and law.

Mrs Ebanks coordinates and prepares reports for the CFATF and FATF, in addition to providing administrative support for the AMLU, IACC, AMLSG and Ministerial Sub-Committee. 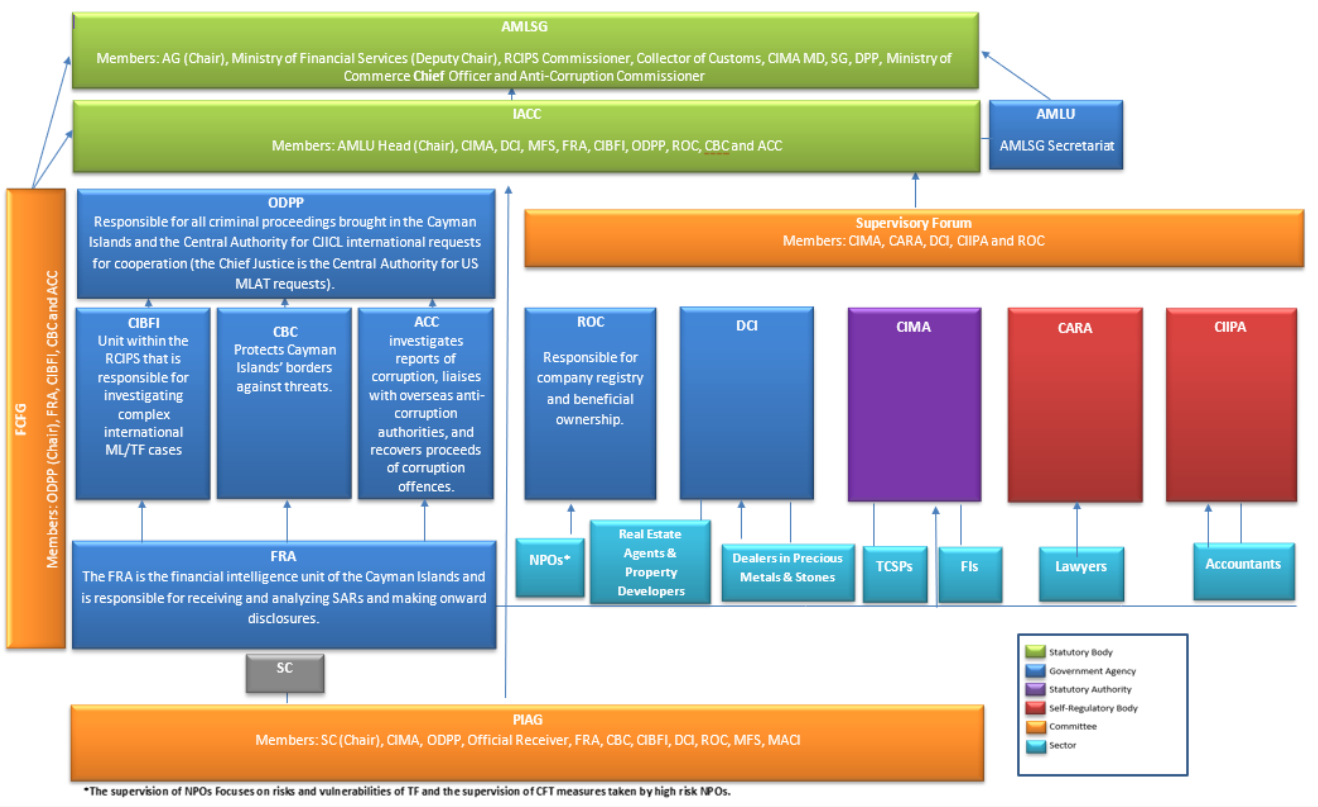 Financial Action Task Force (FATF) was established in 1989 to protect the integrity of the international financial system. To accomplish this, the FATF sets standards for jurisdictions to help them fight money laundering, terrorism financing, and financing proliferation (also known as weapons of mass destruction). These standards are called the 40 Recommendations. The FATF assesses and monitors jurisdictions to ensure that their local laws and regulations meet these globally recognised recommendations. The FATF also assesses and monitors how effective the local laws and regulations are, as implemented by regulators and industry.